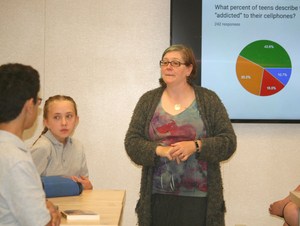 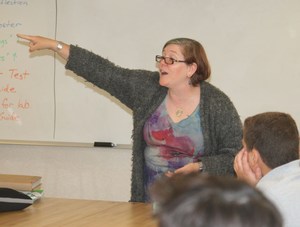 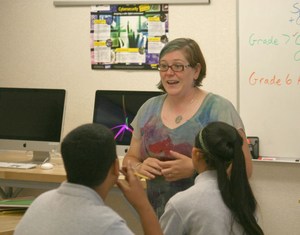 Mrs. Roberts’ philosophy in teaching is a big reason why she is not only a successful teacher at Pope John Middle School, but is also a renowned figure in the Maker Movement.

SPARTA — Sandy Roberts has always had a different way of thinking.

So, when she teaches her Engineering Design Lab and science classes at Pope John XXIII Middle School, Mrs. Roberts asks her students to think of success and failure in an unconventional manner.

“The No. 1 thing I tell kids in my classes is that failure is an option. In fact, it’s a likelihood,” Mrs. Roberts said. “Things are not going to work the way you plan and you are going to get frustrated and angry. You are going to hate certain projects, but all of that is part of the learning process.

“If you don’t break through those failures, you never really challenge yourself and learn.”

Mrs. Roberts’ philosophy in teaching is a big reason why she is not only a successful teacher at Pope John Middle School, but is also a renowned figure in the Maker Movement — a community of people who embrace innovation, creativity, and learning to improve the world and create a better future for it.

“I’m excited,” Mrs. Roberts said. “I’ll be talking about all the Maker Camps I’ve done and giving six years worth of advice on what to do to make it better. I’ll be talking about resilience and the gift of failure. I can’t wait to share my stories with so many people from around the world.”

Long before getting this opportunity, Mrs. Roberts had been focused on doing things the traditional way.

While growing up in Plainfield, Mrs. Roberts had always wanted to be a scientist. In pursuing this dream, she finished at the top of her class at every level of education to the point where she earned a bachelor’s degree in biochemical engineering at Stevens Institute of Technology.

After her time as an undergraduate, Mrs. Roberts went to graduate school at Stevens. During this time, she worked as a biochemist in a lab, managed a theater production company, rebuilt a house and started a family.

It was also a time when Mrs. Roberts’ view on education began to change.

When she finished graduate school, Mrs. Roberts worked a few different jobs before she went back to school to get her teaching certification in math and science at the suggestion of a family member. When she became certified, Mrs. Roberts went on to land a job at Reverend George A. Brown Memorial School.

However, Mrs. Roberts had another pivotal moment of her educational career in 2011 when a friend introduced her to Maker Faire.

“He was a member of Let’s Make Robots and they had a table at Maker Faire,” Mrs. Roberts said. “He was like, ‘Hey, you know electronics. Why don’t you help out?’ So, I went and helped build robots all day. But there was all this wild stuff and I wanted to be a part of it.”

Since then, Mrs. Roberts has devoted her time to the Maker Movement.

She became the first person in New Jersey to create a number of after-school programs all over New Jersey tailored to Maker initiatives, including Kaleidoscope Enrichment. In addition, she has been a part of two award-winning projects at Maker Faire.

And since becoming a teacher at Pope John Middle School last year, she has helped her fifth, sixth and seventh grade students become a part of it.

“It’s about innovation and creativity,” Mrs. Roberts said. “When people think of it, they think I am using really high-tech stuff, but you really don’t need to. Some days in the morning, we are playing with bubble wands and glow sticks. But by the afternoon, we are working with robots and learning how to control them.”

“It’s not like any other class,” Gang said. “We build different things every day, we design all kinds of things. It’s a lot of fun.”

Fellow seventh grade student Gabby Labrada loves how Mrs. Roberts provides a place where they can truly learn how to overcome failure.

“It makes it a lot easier,” Labrada said. “I make a lot of mistakes sometimes because I go too fast. It’s great to have that ability to look at what we did wrong, go try it again and not make the same mistakes.”

While her students will be constantly busy throughout the year trying to come up with their own inventions and creations, Mrs. Roberts hopes that along the way they will see that the rules of the classroom also apply to her. More importantly, she hopes they always have the drive to acquire more knowledge and solve problems in the future.

“I want them to know that things go wrong for me, too,” Mrs. Roberts said. “It’s one of the hardest things to stand up in front of your class and tell them that things did not go the way you planned it. But, I’m always learning and evolving as a teacher and I want them to be lifelong learners, too.”