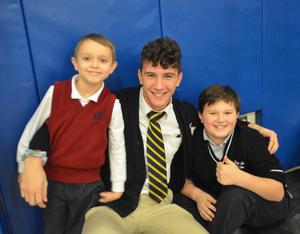 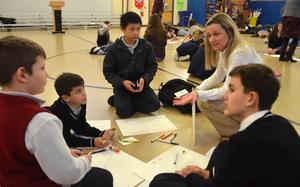 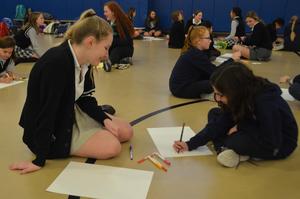 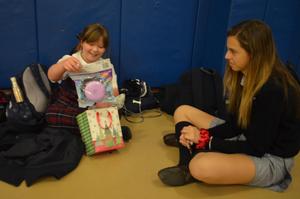 Linking Lions is a newly formed program in which members from Pope John XXIII Regional High School are paired with Pope John XXIII Middle School and Reverend George A. Brown Memorial School students as big brothers or big sisters to talk about what is going on in their lives while forming a connection together and fostering mentor-mentee relationships.

SPARTA — Life is not easy for students sometimes, and when times do get tough, they try to seek help or look to a positive role model to get through their problems they face.

Luckily for 97 students who attend Pope John XXIII Regional High School, Pope John XXIII Middle School and Reverend George A. Brown Memorial School, they can rely on each other because they are part of the Catholic Academy of Sussex County’s newly formed program called Linking Lions.

Linking Lions is a program in which members from the high school are paired with middle school and Reverend Brown students as big brothers or big sisters to talk about what is going on in their lives while forming a connection together and fostering mentor-mentee relationships.

“It’s a really great program,” Pope John XXIII Regional High School senior Kayla Hannemann said. “It allows the high school students to interact with the middle school and elementary school kids. It gives the younger kids a sense of what it is like to grow up in the Pope John community and that the family aspect of our schools will continue for them all the way through high school.”

The idea of Linking Lions came from Reverend Brown Principal Patricia Klebez, who was trying to think about ways of getting students more involved in the school and the entire Academy.

“Since we have merged as an Academy and came onto one campus, we have been focusing on the needs of all of the students,” Klebez said. “We saw that in Reverend Brown, our fourth grade students have a lot of leadership or mentor opportunities to care for the youngest students in the building, but we were thinking, ‘Who is mentoring them?’ After all, they still need guidance because they are so young.

“So, we thought a program like this could work for the Academy because the resources are all right here,” Klebez continued. “We thought that not only our Reverend Brown students could use this guidance and mentorship opportunity, but also the students at the middle school and high school.”

Once the advisors were in place, students had to apply to be a part of the program. Then, Linking Lions officially was born.

The program has had three meetings so far, and each one has been a big hit.

When the students meet at Reverend Brown’s gymnasium, they get together in groups of three to four people and discuss with each other about what’s going on in their lives. In addition, they do a small group activity, such as creating a fun seasonal craft, playing games together, assisting with academics, and get involved in a big group activity with every person in the program.

During one of the meetings, Hanneman was introduced to Reverend Brown fourth grade student Giada Reali. When they were paired up, Hanneman was amazed at Reali because Reali said during a big group activity that she wanted to be a Supreme Court justice when she grows up.

“I was shocked,” Hanneman said. “I mean, what fourth grader wants to say that? That was just amazing and inspiring.”

“In my family, I have a little sister, but to have these two kids look up to me, look to me for advice and see me as a role model is such a heartwarming feeling,” Nugnes said. “I love being around them.”

Nugnes has also been impressed with Muli and Krause and what they do on a daily basis.

“Quinn does so many things from acting in the school play and doing great in school to playing sports,” Nugnes said. “Gabe always talks about karate, how well he does in school and his family. As much as they look up to me, I look up to them because they are the future of our school.”

For middle school students like Muli, Linking Lions has been a great way for him to not only gain a Pope John High School role model who he can look up to, but also be able to help guide a Reverend Brown student as well.

“It’s really cool to have that ‘older brother’ to talk with and a ‘little brother’ to take care of,” Muli said. “Chase has really engaged with Gabe and me, and gives us great advice. Gabe is really funny and enthusiastic. The program is a great outlet for us. We are like a little family.”

For Reverend Brown students like Reali, the program has been able to help give her a role model in Hanneman who she can go to for anything.

“It’s cool because I am the oldest child in my family, so I don’t have an older sibling to talk to about school or other things,” Reali said. “But being with Kayla is fun because she is just like me in that she is funny and she is serious at the same time.”

Members of Linking Lions will meet with each other through the end of May. Ultimately, the goal of the program is to connect students in a meaningful way, creating bonds within the entire Academy that can truly make a difference in a student’s life.

“This is what we have in mind,” Klebez said. “These kids will stand on each other’s shoulders a little bit. You hope that these relationships will build enough where they will keep talking to each other, they will go to a game because a big brother is playing in it or they will attend a play because their little sister is performing in it. It helps us al to connect our three schools and it gives them friendships and experiences that they will potentially last a lifetime.”